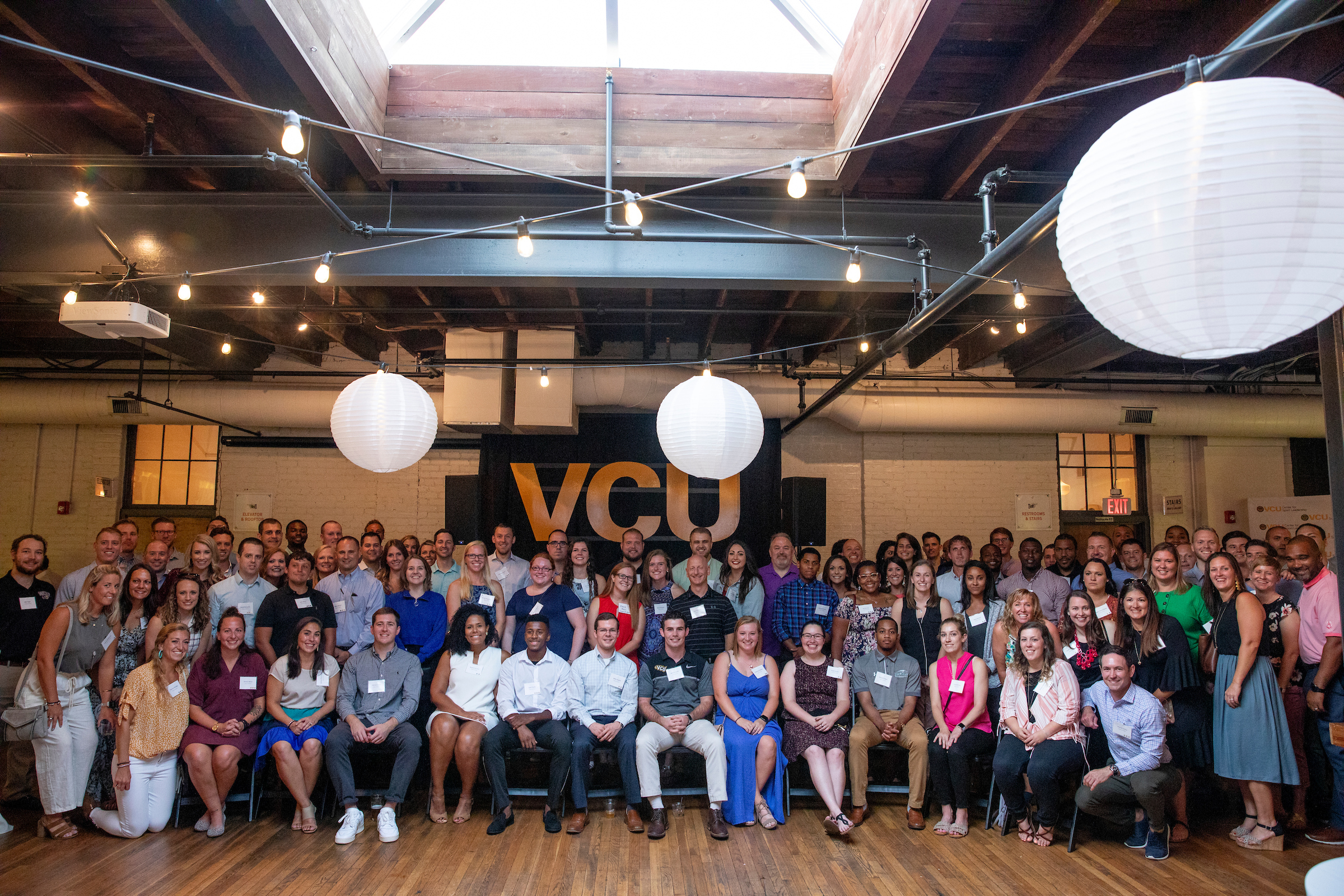 Team spirit was abundant when the VCU Center for Sport Leadership celebrated its 20th anniversary on August 17 at Richmond’s Historic Hofheimer Building. More than 100 graduates representing 19 of the CSL’s 20 classes were present when CSL Alumni Board Chair and U.S. Golf Association Championship Director Charlie Howe (CSL ’07) articulated the sentiment echoed throughout the evening.

“So many people who came through this program were athletes,” he told the group. “We love sports, that’s why we’re working in the industry. And many of us found the same camaraderie here that we did on our teams – good people who truly care and who push each other to succeed.”

Ranked #8 in the world
In the 20 years since it was founded, VCU’s Center for Sport Leadership has steadily gained a global reputation. SportBusiness currently ranks it the number eight post-graduate sports business program worldwide. CSL ranks number four in the world in graduate satisfaction.

CSL Executive Director Carrie LeCrom (CSL ’03) says there are two primary reasons for the program’s success: an unsurpassed alumni network and a strong relationship with the VCU athletic department as well as Richmond’s vibrant urban sporting community. VCU recently moved the Center into the VCU School of Business to position it for even greater success. 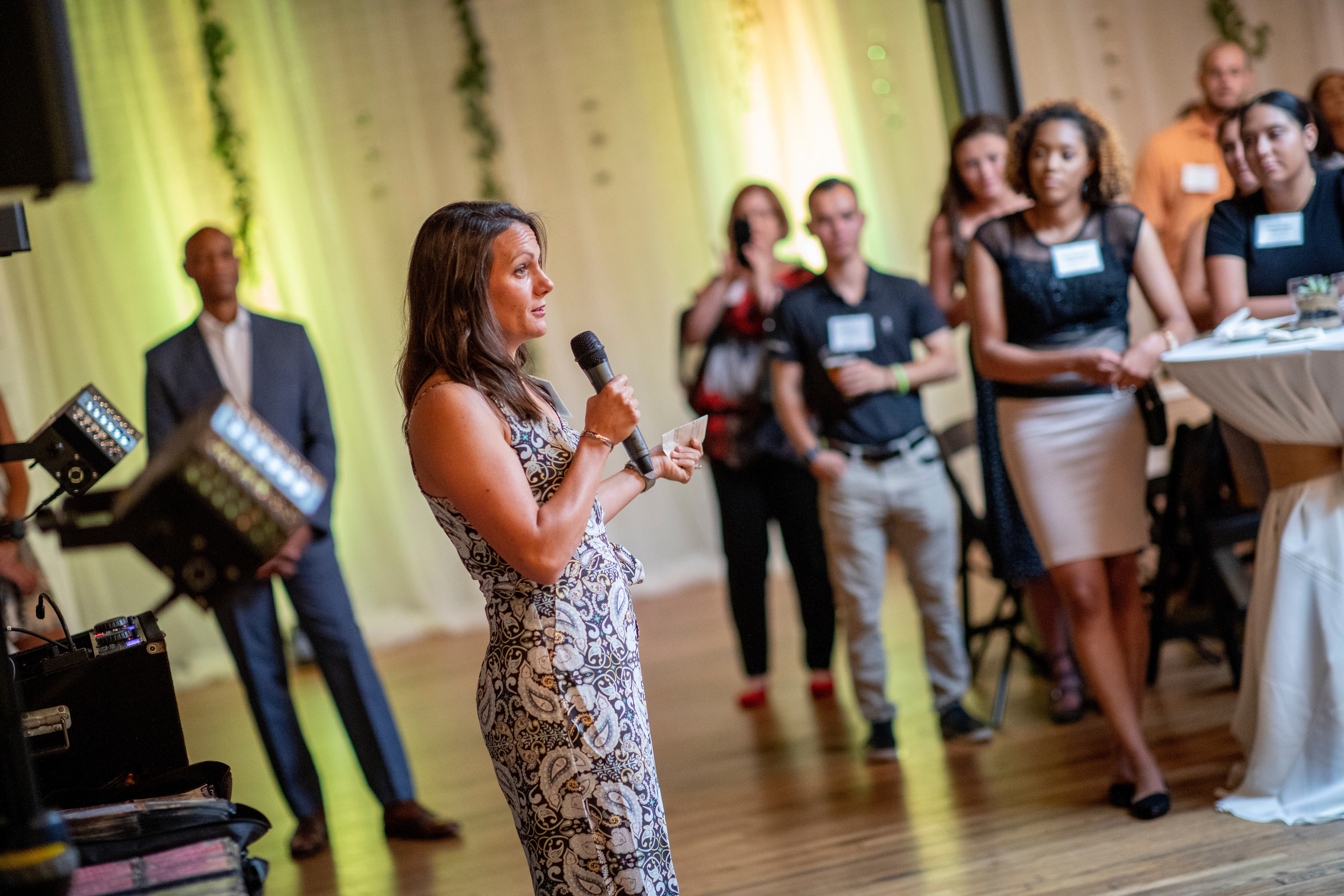 According to LeCrom, there is an eagerness among CSL alumni to stay connected to the program and to help other students. “The passion of our alumni network is something I haven’t seen anywhere else. That’s almost completely driven by Greg Burton [CSL director of Communications & Engagement (CSL ’12)] and our board. They are so good at connecting people.”

Unsurpassed alumni network
“Our network grows every year and alumni understand the importance of keeping in touch and the value of their network,” says Howe. “We provide mentorship opportunities to students every year. Name any sports field and it’s likely that we have a graduate who is pretty successful there.”

Ashley Champigny (CSL ’09), director of championships for the Atlantic Coast Conference, traveled from Greensboro, N.C., to attend the reunion. “It really is like a family here,” she explained. “I may not see these people every day, but I would do anything for them. When I was a student, they encouraged us to reach out and connect with alumni. I learned so much about their careers and the industry, so any time Carrie or Greg mention they have a student who is interested in speaking with me, I make the time.”

Champigny strengthened connections of her own at the reunion, catching up with Anthony Henderson (CSL ’04). “I first met him when Keith Rafter (CSL ’00) introduced us when I was in grad school. Now he’s back at William & Mary, leading athletics fundraising,” she explained. Champigny, who played women’s lacrosse as an undergraduate at W&M, was delighted to make the connection. “It’s so important to connect with the right people. You never know how you might help each other.”

“We work hard to build relationships that extend well beyond graduation,” says Burton. “Not a day goes by when I’m not talking, texting or emailing with five to ten alumni, nurturing our robust network.”

If hashtags are any indicator, CSL is clearly doing something right. Just hours after the reunion, Twitter and Instagram were exploding with alumni posts celebrating the #CSLNetwork.

CSL’s powerhouse alumni network plays an important role in the program achieving a 92 percent job placement rate among graduates over the last three years. It’s also why alumni give back. An impressive 25 percent of alumni contributed more than $70,000 over the last three years in support of CSL scholarship programs. And more than 100 of approximately 850 total alumni attended the reunion. Justin Padjen(CSL ‘04) traveled more than 4,000 miles from Denmark where he is employed in business development at TrackMan.

World-class instruction & real-world experience
Matt Ensor (CSL ’11), director of communications at University of Arizona Athletics, traveled 2,000 miles from Tucson to reunite with his fellow classmates. Just months ago, after being contacted by Burton, he helped a recent CSL graduate land a ticketing position at the University of Arizona. “I loved my year here. I came to this program with no connection to Virginia and not knowing a single person,” he laughs. Ensor applied to programs at Ohio University and Central Michigan but made up his mind the moment he set foot on the VCU campus.

“The one-year master’s was a plus but so was being able to work in sports information at the same time.” What Ensor never could have anticipated that his graduate communications work in 2011 would coincide with VCU Men’s Basketball’s legendary Final Four run. “I was in the right place at the right time. It was a crash course in working college athletics.”

“It’s surprising to me that more graduate sports management programs don’t work hand-in-hand with their athletic department,” says LeCrom. “That’s what students want to be doing. We’ve been housed with VCU Athletics since we started. That shouldn’t be unique, but it is.”

Michelle Meadows (CSL ’03), athletic director at Longwood University, also was attracted to the real-life experience she could gain in the CSL program. “They offered the combination of academic excellence and practical experience.” She did her graduate assistantship with VCU Athletics’ National College Athletic Association (NCAA) Compliance office.

Career-building connections
Meadows and others recalled how CSL alumni have influenced their own careers. Meadows had been at Longwood University for only a few months when she received a call from classmate Troy Austin (CSL ’03). He had seen a posting for a development position with Longwood Athletics and wanted to learn more about the university. Meadows recommended Austin, who got the job and rapidly advanced. Within 18 months of starting, he was named interim athletic director and would go on to serve as Longwood’s athletic director for more than a decade.

“For 13 years, Troy mentored me,” says Meadows. By the time Austin left Longwood to become a senior associate athletic director for Internal Affairs at his undergraduate alma mater, Duke University, Meadows was prepared to step into his role.

“This program is special,” Meadows says. “They mean it when they say, ‘stay connected’ and ‘if you need anything, call,” she says. “And if they don’t have a direct connection, they figure out who does."

“When you have job opportunities, you can go to your CSL network and can have confidence that their recommendation is someone you’d want to join your team.”

Her sentiment is shared by Grant Duncan (CSL ‘12), assistant athletics director for Marketing and Promotions at Virginia Tech. “In the program, every student has their own mentor. After graduation, they do such an excellent job of staying in touch. They really care about you and your career.

“They are people I would go to immediately if I need to fill a position,” he says. “I’d love to hire someone from our program.”