Author: Hannah Matheson
Founder & President of Next Level Sports Will Reece represents some of the most talented college basketball coaches in the nation, including VCU's Mike Rhoades. 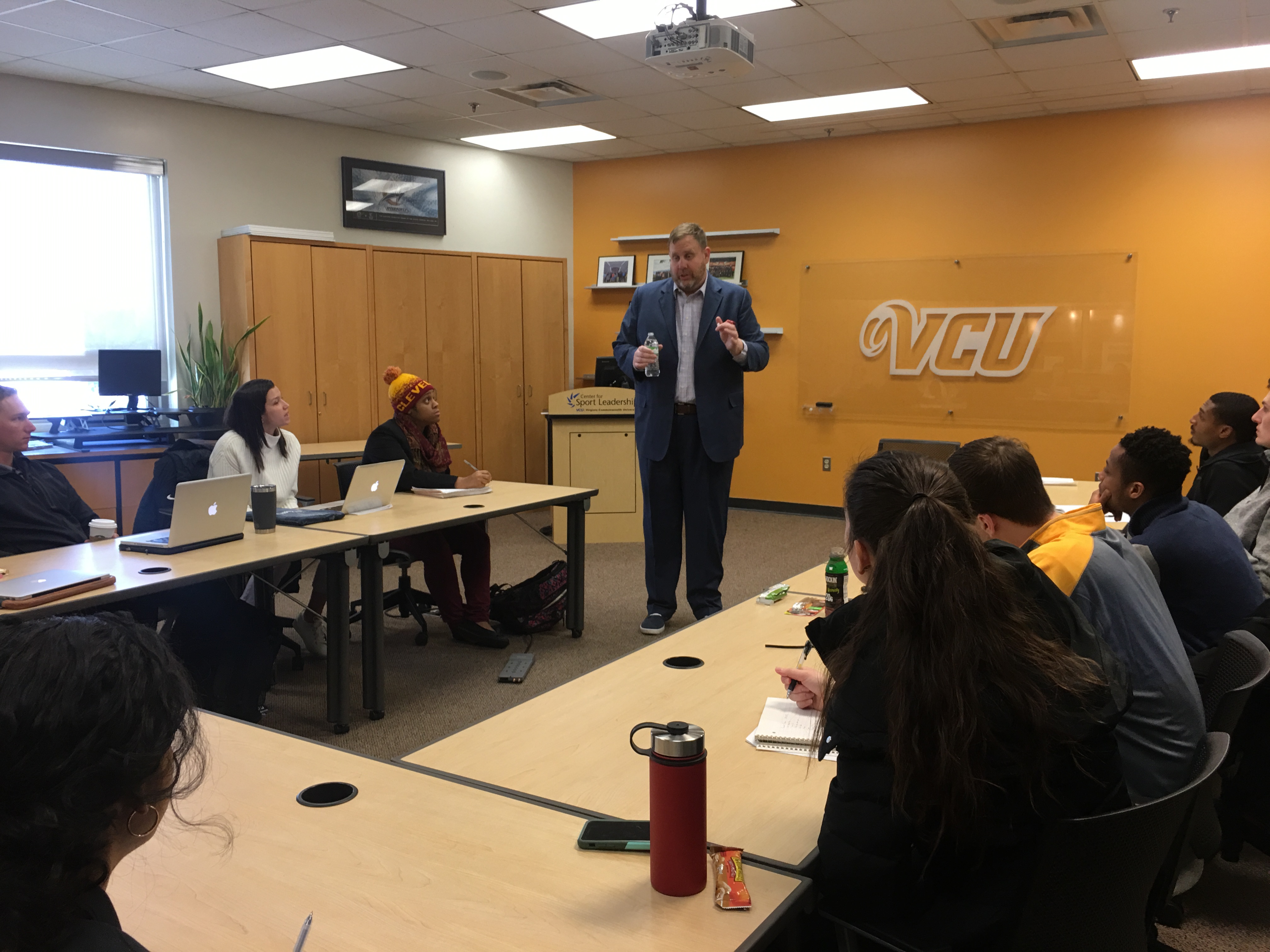 CSL students chuckled when Partner and Co-Founder of NextLevel Sports Will Reece told them how to infiltrate the closed circle that is college athletics, but he meant it. Reece revealed that it took him about two years to finally become a part of that circle, and not without prior years of hard work, networking, and overcoming a lot of adversity.

Reece shared his personal story to our grad students from the time he was a kid cultivating his love for sports, to coaching his own AU basketball team at the age of 14, suffering a traumatic spinal injury, and continuing on to have a decorated 15-year coaching career in high school and college basketball and ultimately starting his company, NextLevel Sports.

“Sometimes adversity brings out something in you didn’t know you had if you just get through it.” The summer before Reece was to start his collegiate basketball career at Oklahoma Baptist University, he was severely injured on his 18th birthday while working at a summer camp. Reece’s 6th vertebrae exploded when he came down head first on a “blob” in the middle of a lake. “It was remarkable to think about having been held next up in a lake, unable to move, to where I am today.”

Although his career as a student-athlete was over before it started, his dreams of pursing his true passion were not yet over. Reece always knew he wanted to coach. In high school, when Reece wasn’t on the court himself, one could find him in a tie on the bench with the freshman and JV coaches at their games almost every night of the week. “A huge part of who we are as coaches comes from who we’ve been with and where we’ve been.”

Recovering from his injury, Reece took classes at the junior college in his hometown of Tulsa, Oklahoma, and went back to coach for his high school teams. Taking every opportunity, he could, Reece had an exceptional run as a coach, but as he and his wife were about to expand their family, a realization struck him.

“I was an entrepreneur in ways I didn’t think I was, because I had the title of ‘coach’.” Reece then made the decision to end his coaching career and get into the agency business. Today, NextLevel Sports just celebrated its 12th anniversary. They have over 40 clients, 20 of who are NCAA basketball coaches. Their goal at NextLevel Sports is to “get coaches from point a to point b” and help aspiring coaches with career advancement.

Reece made sure to leave CSL students with invaluable advice. “Be the best version of yourself… and when adversity hits, how do you react? It may kick you on to a different path but that doesn’t mean it’s the wrong path.”